How blockchain and cryptocurrency will disrupt your business

Cryptocurrency and blockchain have both shown meteoric growth in the last few years. But is your business ready to realise the full potential and impact that these will have on your industry in the very near future?

The rise of cryptocurrency has come from a long rising crisis involving trust in governmental and financial institutions holding too much economic power, general financial illiteracy, and a desire to move to a more decentralised information architecture that favours the interests of the general population over institution fending for their own financial gains.

Cryptocurrencies once seen as the purview of the black market and illegal activities have now moved to the mainstream with Tesla, Paypal, VISA and just about every large technology company staking their ground in the payment and blockchain technology ether. Volatility in pricing is stabilising, Market Caps have surpassed the biggest industries in the world, and FIAT back assets and publicly available trading platforms are all providing investment opportunities that are not only legal but lucrative, beneficial and revolutionary.

“The main advantage of blockchain technology is supposed to be that it's more secure, but new technologies are generally hard for people to trust, and this paradox can't really be avoided. "

Institutions that previously eschewed cryptocurrency and blockchain as fly-by-night projects by coding nerds that have publicly rallied against use cases and investment opportunities are now holding top Market Cap assets on their balance sheets. And along with the prevalence of EFTs (exchange-traded funds) are now being adopted by mainstream businesses and governments in many countries, again validating the existence and mass acceptance of cryptocurrencies.

The largest companies in the world like Apple, Walmart, JP Morgan Chase, and Microsoft all have blockchains in development for their ecosystems and are putting Bitcoin and Other Big Cap Crypto assets onto their balance sheets.

Media scepticism aside, the use of the blockchain technological lexis is largely misunderstood by the average consumer. There's a general air of uncertainty around cryptocurrencies which for retailers means no guarantee that consumers will use these leaving questions as to whether it's even worth the risk.

With blockchain technology still in its infancy, level 2 smart contracts and DAPPs are still years off. But failing to recognise this paradigm shift in technology will mean the end of businesses that are not willing to adopt such as we witnessed in the ’90s with Kodak, Nokia, XEROX, Yahoo & AOL, MySpace, and Blockbuster video. 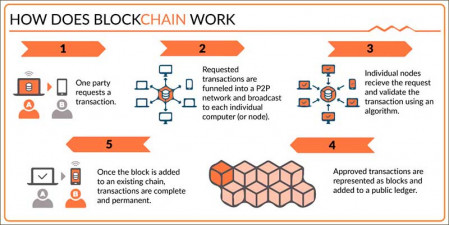 But what is blockchain technology?

A Blockchain is a decentralized, distributed ledger technology that gives users the right and responsibility to own and protect their data, rather than depending on central authority (like a bank or AWS, or Cloud servers), using exceptionally high levels of encryption which allows for data integrity and security against theft. There are many different blockchains including public (Bitcoin), Permission-Based (XRP) and private (tightly controlled access), but they all rely on a consensus model. There is no central authority or database on a blockchain. It's held in strings of information exactly replicated across many nodes. It's decentralised and it's safe. Blockchain is what most cryptocurrencies are built on, and is now also being developed in every business application you can imagine.

On the blockchain, data security by decentralizing encrypted data across a large network of computers (nodes). It replaces the single source of truth, and instead, there are millions of locations holding this information which must come to a consensus on the information held. If one node were to be corrupted, the other nodes have that data locked still under that consensus. It is by far the most secure way of holding data. Consider a bank server coming under attack. One source of information could mean everything is lost.

Decentralisation on a distributed ledger requires a consensus of replicated, shared, and synchronized digital data spread on public or private peer-to-peer networks (nodes), across multiple sites, countries, or institutions by proof of work. Now image that data is encrypted replicated in hundreds of locations. It’s safe and no ONE source or entity has control over it.

Top Blockchain projects include Ethereum with its blockchain and programmable Smart contracts and DAPPs that sit on top, Binance Chain (the world's leading cryptocurrency trading platform) Stellar, Tezos, and many many more.

Why does Bitcoin work? Because of transparency.

Bitcoin was created as a decentralized form of money, rather than money that was government-controlled (FIAT currency). To create a decentralized system that functioned and that people could trust, the founder of bitcoin (Satoshi Nakamoto) created decentralized ledgers called blockchains to safely store these on.

Every Bitcoin transaction is publicly viewable in the form of wallets, is highly traceable, and is permanently stored on the Bitcoin blockchain node network. At any time you can see the balance and transactions of any bitcoin address. In fact, you can see every wallet on the leger and the trillions that are being traded out of which wallet and when. Those wallets are anonymised and public at the same time.

Bitcoin is a deflationary asset. There is a limited supply, that will only go UP in value. And yes, although it is not FIAT backed, neither is the dollar these days. And with massive inflation coming our way very shortly, this intrinsically valued coin is going to pass the investment market cap within the next few years. The only ones not getting on board are the ones who won't take the time to understand it. And that's just not good business.

Bitcoin has a market value of over 1.4 trillion dollars. That's circulating supply vs staked and trading pairs, pooled or yield farming.

Its market capitalization makes it larger than any publicly traded bank in the world. Only 6th behind Apple, Microsoft, Amazon, and Alphabet (Google).

Why are blockchain and cryptocurrencies going to be so important to business?

Business cases for blockchain and cryptocurrency

With adoption from the world's biggest banks, investment companies and payment platforms all jumping on board, cryptocurrencies are bound to face a sharp uptake by the general population. It's estimated that 10% of the population of the US owns Bitcoin. PayPal users in the U.S. can now buy, sell, hold, and checkout with cryptocurrencies directly through their Personal or Premier PayPal account. They’ll be able to learn about crypto, track crypto prices, all without leaving the PayPal app. China is developing their digital YUAN and will be rolling that in the future. With the forced adoption of 1/3 of the world's population, they are the future of digital currency. Using cryptocurrencies for instantaneous trade means there are fewer FIAT & transaction fees, and they will be instantaneous.

“PayPal users soon will be able to use cryptocurrency to pay for merchandise at millions of retailers, a move that could further push digital currencies into the mainstream. The announcement comes a day after Visa (ticker: V) said it would process crypto payments. Mastercard (MA) said last month it would facilitate crypto transactions beginning this year.”

With a Bitcoin wallet, buyers can easily avoid foreign exchange fees while buying products overseas. Fiat money transferred to digital currency can be transferred to any corner of the world without any restrictions.

Japanese e-commerce giant Rakuten is now allowing users to spend bitcoin (BTC, -2.46%) and other cryptocurrencies at merchants throughout Japan. The move means its 95 million registered users can pay with crypto at thousands of merchants across Japan that accept Rakuten Pay and Rakuten Point Card

“The technology provides a way of recording transactions or any digital interaction in a way that is secure, transparent, highly resistant to outages, auditable, and efficient”

Cyber-attacks have become increasingly targeted and complex using more sophisticated malware in an attempt to steal valuable data such as intellectual property, personal information, health records, financial data, using ransomware techniques or disruption by Distributed Denial of Service attacks. Blockchain technology maintains that data security through its consensus mechanisms. There is no possibility on its core level of data being destroyed or corrupted because of its encryption and decentralised storage. It is the future storage protocol.

The slowest industry to adopt blockchain technology and cryptocurrency is the one that faces the most to lose. Not only a digital currency but deflationary as well, cryptocurrency challenges traditional FIAT currencies. Cryptos were started as a direct response to institutional finance companies. By removing the need for oversight and decentralising the services, Crypto blockchains remove the maintenance and management fees and services, and capital out right out from underneath them.

World-leading investment funds (Warren Buffet from Berkshire Hathaway), and many world leaders have spent plenty of time denigrating cryptocurrencies as non-secure unbacked assets. This explanation is fundamentally flawed in that even FIAT currencies are no longer backed by gold or bond and instead just printed at will. FIAT is inflationary by nature and loses its value over time. In the cryptocurrency environment, only the market will determine the value of a COIN asset on its own.

Banks, EFTs and FEC have been VERY slow in the adoption of this technology but are now starting to put cryptos onto their balance sheets as they realise the true value of what cryptocurrencies will mean to the future and are finally capitulating to the markets. Soon you will be able to purchase cryptos through your regular online banking services, further validating them as the currency of the future.

Blockchain will enable transparent and accurate end-to-end tracking through the supply chain. As businesses digitise their physical assets and create a decentralised immutable record of their transactions, making it immediately traceability and supply chain transparency from end to end for the user. This transparency will decrease losses due to counterfeit and grey-market products while digitisation will reduce administrative costs and asset loss.

Benefits of cryptocurrencies for business

Get ready for the future of blockchain and cryptocurrencies

As understanding and acceptance of blockchain technology and cryptocurrency grows, the benefits are becoming clarified. Our daily lives are becoming more influenced by automation and blockchain technology will be there to guarantee the safety of our data and create a safer environment from food tracing to online shopping payments and transactions, health records, to your financial records and personal identity. The future will be held on the blockchain.

And from faster payment processing and encrypted data protection to reduced administrative costs, it would be irresponsible of organisations not to explore the powerful technology that will soon be available to employ.

As with all technologies, your business must be able to adapt new strategies quickly and make the most of this competitive advantage. There’s a bigger discussion about what cryptocurrencies — and the blockchain technology behind them — can do for every business sector in the very near future.

If you're ready to take your business to the next level we'd love to hear from you.

Get a quote today